To Whomsoever It May Concern: Letter of Recommendation for Aadish

Having worked directly with Aadish for over three years since he joined Bacardi’s Global Travel Retail (GTR) Division in 2016, I have witnessed his positive contribution to our division’s growth and been impressed with his progress across different functions and projects. I have engaged with Aadish during his roles in Revenue Growth Management (2016/18), Brand Management (2018/19) as Senior Commercial Director for the business and more recently in his Insight & Strategy role as Managing Director, Bacardi Global Travel Retail.

Aadish supported me in the development of a Purpose & Vision for our business, along with the wider GTR leadership team. He astutely took inputs from a cross-section of stakeholders and distilled these into key imperatives for our business over the strategic plan cycle. Aadish created a ‘walk-to-vision’ i.e. a 10 year horizon plan across categories to set up requirements and milestones for our 10 year transformation plan. Throughout this process, his long-term perspective on factors that could shape the business was impressive – especially since these forums involved senior business leaders. He acted on this long-term perspective by developing a 12 Quarter Innovation Pipeline including future trending product categories like cognac (with D’USSE) or American Whiskey (with ANGEL’S ENVY) to support delivery of the GTR ‘walk-to-vision’.

Aadish is tenacious and brings a strong work ethic. This has been evident in his innovation projects on BACARDI rums ‘label-personalisation’ and GREY GOOSE vodka ‘Destination City Packs’ development. Based on an insight around personalisation, Aadish supported the creation of a program on BACARDI rum that gave consumers access to personalize their rum bottles. As a ‘first-ever’ this project faced several internal regulatory and global brand marketing barriers. However, Aadish tenaciously held firm and was able to successfully pilot it with strong results in 2018. In 2019, this program rolled out in over 40 international airports. Aadish’s tenacity & strong work ethic enabled delivery of GREY GOOSE Destination City Packs where he persevered in identifying the right flexible innovation technology to deliver smaller production runs in order to create this exclusive pack for travelers. 2019’s plan covers seven international airport cities of Sydney, Singapore, Mumbai, Dubai, Paris, London and New York & will be scaled up in 2020. These two projects showcased Aadish’s ability to step-up, be tenacious and persevere with a strong work ethic.

Intellectual curiosity especially around data is a skill that Aadish has demonstrated over the past few years in GTR. It was at its best display when he was Brand Manager PATRON working on the integration of PATRON into Bacardi GTR (Bacardi Limited acquired PATRON in May 2018). A pivotal integration task was to develop a fit-for-purpose consumer pricing model for PATRON’s roll-out in GTR. Based on a deep review of extensive consumer pricing data across different geographical regions (domestic high street retail as well as airport retail), competitive brands and internal data, Aadish created the price repositioning commercial plan for PATRON. This plan is currently being implemented and will support value generation for Bacardi GTR in the context of our commitments to deliver the wider business’ acquisition model for the brand.

Aadish has lived, studied and worked across different geographies e.g. India, Thailand, USA, UAE and the United Kingdom. This exposure to diverse cultures contributes to his unique ability to work seamlessly and collaboratively in cross-cultural teams. Aadish best demonstrated this ability to work in cross-cultural teams when he was leading pricing plans for 2017 in his  Revenue Growth Management role. One particular success was with a key Asian retailer, where he actively listened to the team around the retailer’s needs and then flexed his style in responding thereby, giving the commercial team a more nuanced solution to support a tough negotiation.

Aadish’s development areas are around being more expressive & presentation skills. Aadish often has good ideas and his intellectual curiosity opens up interesting perspectives; however he tends to be reticent in larger forums. The business would definitely benefit if Aadish were to speak-his-mind more often. He would also have far greater impact with improved presentation skills – specifically around simplifying his messaging and delivering it with confidence.  Aadish has had conversations with his line managers on this subject and begun to act on this feedback particularly around presentation skills. I am aware he is now taking initiative to present at the marketing team monthly meetings and in our wider quarterly business review meetings.

Aadish would strongly benefit from a Masters in Business Adminstration (MBA). It will help give him a broader & more strategic business perspective coupled with exposure to wider functional skills – beyond what he has experienced at Bacardi. It will better shape and fast-track his development as he learns from a diverse faculty and peer group at an MBA program.  I believe Aadish’s decision to pursue an MBA at the Said Business School, Oxford University at this point of time is the right one and am delighted to provide this letter of recommendation in support of his application.

Aditya (Name Changed) has been working with me for the last Two and half years. Within this short span, he has amazed us by solving many complex problems at our unit. He came up with many innovative & long-standing solutions for existing problems. He is presently in-charge of our Electronics and Instrumentation Section.

When I compare Saurav’s performance with that of other employees in similar roles at our company, I can conclude that he has demonstrated leadership capabilities which makes him stand out from the rest of the team.

Why I rate him Outstanding:

One instance where Saurav really outshone others with his leadership and problem solving capabilities was when we were facing frequent breakdowns of our conveyor belt because of the failure of the signaling system. The signaling system is used to communicate the status of the conveyor belt and stops the belt during an emergency. Saurav took the initiative to look into the system deeply. He led and motivated his team members that we can find some ways to overcome our difficulty of which his team members were skeptical but with Saurav’s persuasion they agreed to look into the system deeply. They together inspected the entire system inch by inch and came up with both short term and long term solutions. His team made few modifications and solutions along the belt track. These small modifications is of great value because we can check the healthiness of the signaling system without stopping the conveyor belt.  This has facilitated us to know the situation beforehand and we can now plan for maintenance during the daily shutdown of the belt. The modification has helped us reduce approximately 30% of the breakdown time. Though the problem have not eradicated fully but through their work we came to know many problems which we are not aware of. That helped us decide to go with saurav’s recommendation to install a new system in place of 30 years old system. So not only Saurav led a team and fixed an old problem but he went beyond his duties to suggest and come up with an entirely new solutions and took the initiative to implement that as well.

The thing I like the most in Saurav is his commitment and initiative taking skills when he comes up with innovative ideas and implement them effectively.

One more example that comes in mind is that there was a need for four new operators for the fire hydrant pumping system at our plant as directed by the Safety Department owing to the pumping station’s outdated and antiquated manual operating processes.  Hiring four new operators full-time is an expensive affair.   Saurav arrived at a technically feasible proposal to automate the pumping station which was also favorable to our bottom line.   In order to circumvent the additional cost of hiring pump operators in three shifts, he, along with his teammates, designed and implemented a plan to automate the pumping system by changing the necessary instrumentation circuitry and wiring. During the implementation phase of the above mentioned system, he faced several hurdles since he was new to this type of work. However, as a team player, he did not hesitate to learn a new technology even from his juniors.        As a result, His deep sense of commitment and his initiative led us to save extra manpower costs. Management acknowledged his efforts and awarded “SARJANA”, An award of excellence.

The one area I would like Saurav to give some constructive feedback and improve upon is:

The way he presents his document and its style.  I observed that sometimes employees from other departments faced difficulties in understanding the documents prepared by him. I gave him constructive feedback about this and asked him to improve his documentation skills and I think that he took my feedback positively as seen from his work later. He then started working on his documentation skills and would often come to me and ask me to review his progress. As per my advice, he made the necessary changes.

Earlier, Saurav would put most of the data in the text format because of which we had to read it thoroughly. He soon started including pictures, pie charts, bar graphs etc. due to which understanding the documents became easy even for a new engineer. I also saw remarkable changes in his team members’ style of preparing and presenting documents.  This showed to me that he transfers his learning to his team members too.

Saurav’s attitude and behaviour when working with: (a) managers/supervisors (b) peers (c) subordinates:

As far as his attitude and behavior towards his supervisors, peers and subordinates are concerned, I can simply say that he gives utmost respect to each and every one. He listens to his manager and supervisors carefully and then acts accordingly. That you can understand from my explanation in the earlier paragraph.  He remains cordial towards his peers and subordinates. He always sough views of his subordinates and never force any of his ideas. He consult with them and then he picks the idea that seems best for a particular task. I have seen him motivating his subordinates to give their best even during adverse situation and is always ready for help when required. I heard him encouraging and applauding his subordinates for their good work and at the same time, if something went wrong, he will help explain how to carry out the task next time, so that such problem can be avoided.

My Suggestion, what he will be doing in ten years:

Seeing his managerial ability to carry out the task individually or in a team, I can simply say that ten year down the line he will be a great manager and a leader. Added to this, if he gets an opportunity to study at the Judge Business School, He will learn both theoretical and practical skills of management. Such an amalgamation will definitely help him become a leader in business world. I believe, Saurav will also have some great experiences to share with his peers if admitted to Judge Business School, which I am sure will make class discussions very interesting. 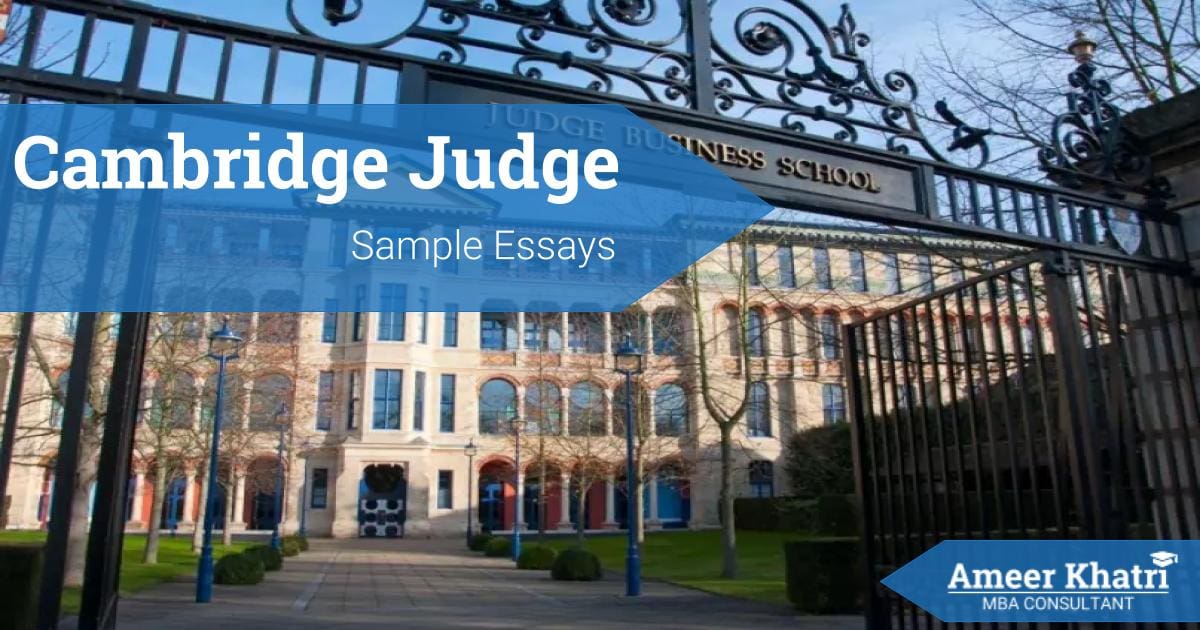 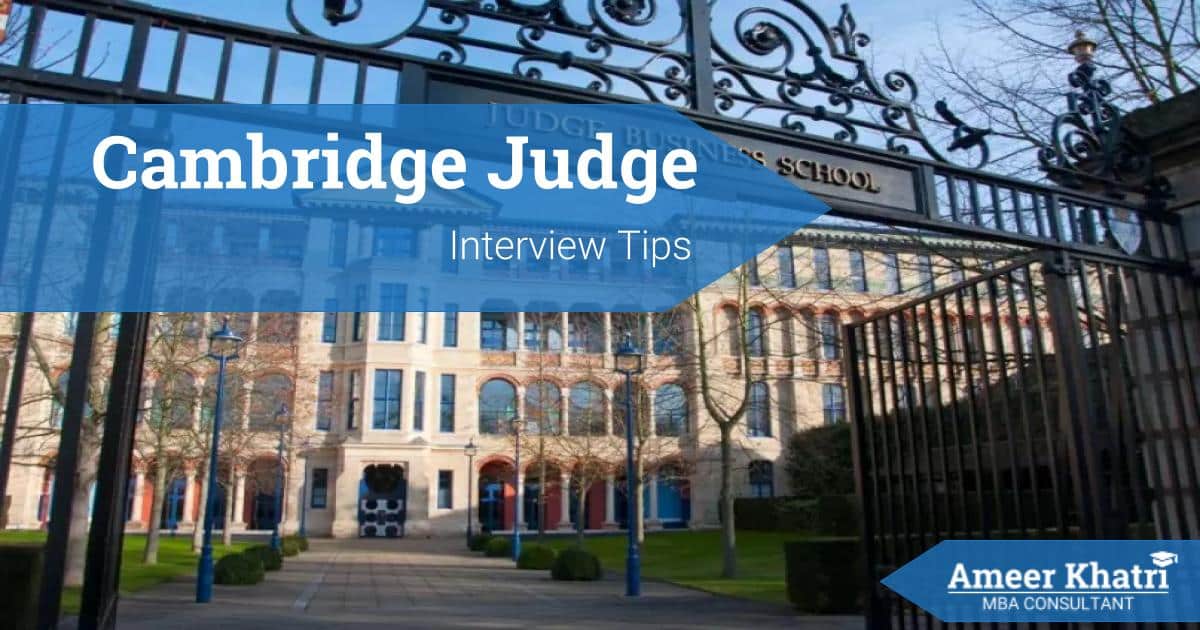